Inland seas exist in that area of filled water which is surrounded by land. It is another form of a lake, which is naturally always astonishingly beautiful. Whenever we see a lake or even a small pond, our heart arouses and it gives such gratification to us as if we are in another world. If you are a green panther, Nepal would be the best spot for your next voyage, believe me, it is the best place to snatch your expectations.

Nepal is a country with highlands, which means it is the source of many rivers and lakes. The melting snow of the mountain peaks gives way to gorgeous rivers, lakes and various water-bodies. There are numerous lakes situated in Nepal, among which main lakes are around 65 in number.

Some of the Best Lakes of Nepal to Travel: 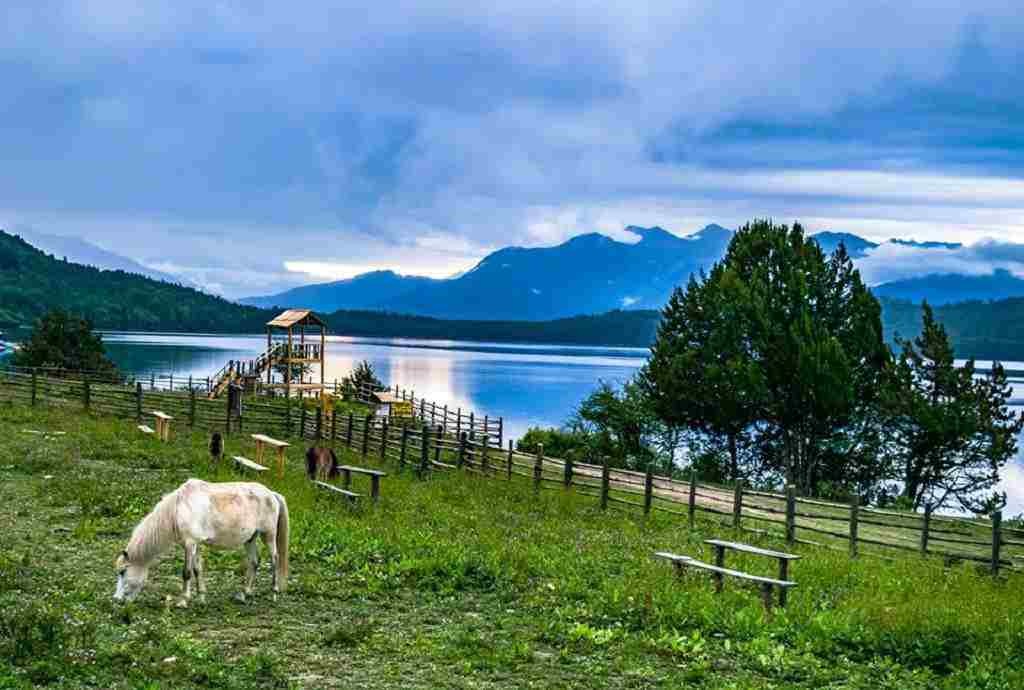 Rara Lake is one of the drop-dead gorgeous lakes situated in the Mugu district in the western part of Nepal. It lies at an altitude of 2990 (9810ft) above sea level and is titled as the biggest lake of Nepal with 10.8 square kilometers water surface. It is the main reason behind the constant flow of tourists towards Rara National Park even though the path is tough. You must walk a long hour to end up to this spectacularly beautiful destination or you can even get here through air transportation via Talcha airport which is around 4 km east of Rara Lake. You can be keen on the pristine beauty of the lake or you can also prefer trekking and sightseeing in and around the national park. 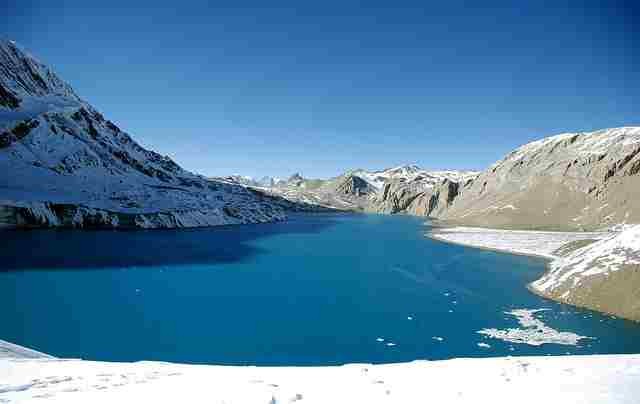 Located at Manang district with an altitude of 4949m (16237ft) is the highest lake of not only Nepal but the world. It is desired for its altitude as well as for its winsomeness. It is one of the popular and best side hikes of the Annapurna circuit and was the location for one of the highest ever scuba dives. The lake is circumambient by mountains namely, Khangsar, Muktinath Peak, Nilgiri, and Tilicho. The lake is mostly reached through trekking, which is really exciting and thrilling, more or less rewarding too. 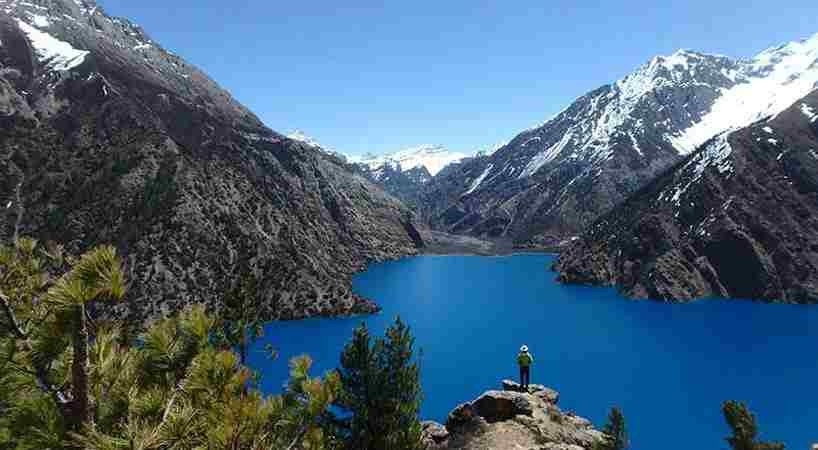 The lake settled at an elevation of 3611.5m (11849ft) with a maximum depth of 145m (476ft) is named after Shey Phoksundo. It is the deepest lake of Nepal, situated in Dolpa district. In September 2007, this lake had been designated as a Ramsar site. It is not only famous for its depth but also famous for its exotic turquoise blue color, a greenish-blue lake. It lies in the northern part of the Dhaulagiri range and therefore surrounded by pristine snow-capped mountains. It can be said a hidden gem or wonder of Nepal.

Phewa Lake is also written as Fewa Lake (Phewa Tal) and often called Baidam Tal, Tal is a Nepali word for lakes. Phewa Lake is the second largest lake in Nepal located in the south of Pokhara valley. It lies at an altitude 742m (2434 ft) and covers an area of 4.43 square kilometers. It is famous for the reflection of mountains such as Machhapuchhre, Annapurna and Dhaulagiri on its surface and the fact that it is the only one lake of Nepal with the temple in its center or we can say the lake having an island, the temple is called Tal Barahi Temple. Therefore, Phewa Lake is the most visited lake in Nepal. You can also scrutinize the beauty of the lake from World Peace Pagoda, “The Shanti Stupa” or go for a walk around the lakeside in the evening. 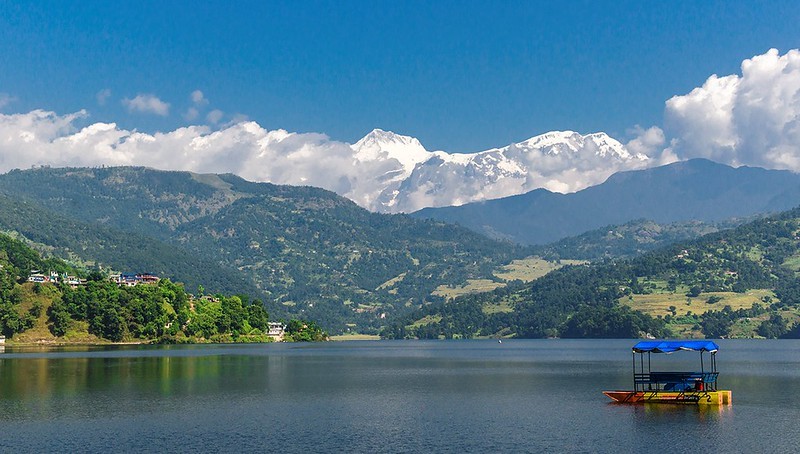 Begnas Lake is one of the freshwater lakes of Pokhara, and the third-largest lake in Nepal. It is the second-largest lake of Pokhara after Phewa Lake among the eight lakes in Pokhara valley. The elevation of the lake is 650m (2133ft) and covers an area of 3.28 square kilometers. The water level always fluctuates seasonally due to rain and used continuously for irrigation purposes. This is one of the popular touristic destinations of Pokhara, where some parts of the lake are still used as caged fisheries. 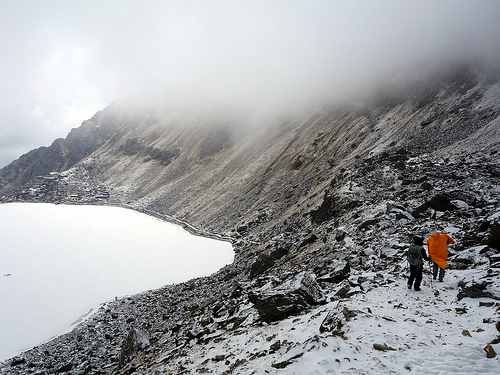 Gosaikunda Lake is the main attraction of Langtang National Park, which is situated at an altitude of 4380m (14,370ft) in the Rasuwa district of Nepal. It is an alpine freshwater lake that remains frozen for six months in winter. It was as well designated as a Ramsar site on 29 September 2007. There are numerous lakes in this area, about 108 in number with diverse sizes. It is a holy lake and holds a religious significance for Hindu pilgrims. All the holy books of Hindu religion introduce this lake as the place where Lord Shiva cooled down his stinging throat after he had swallowed poison, which is mentioned in a popular Hindu mythology related to Amrit Manthana. This lake is not only important from the religious point of view but also plays a vital role in prospering the field of tourism. The Gosaikunda Trek is often known as one of the best trekking trails of Nepal.

Gokyo Lakes are the world’s highest freshwater lakes system situated in Sagarmatha National Park. The elevation of the lakes is around 4700-5000m (15,400-16,400ft). It comprises six main lakes, namely, Gokyo Cho, Thonak Cho, Gyazumpa Cho, Tanjung Cho, Ngojumba Cho, and Longbangu Cho, among which Thonak lake is the largest one and Gokyo is the main lake. In September 2007, it was also designated as a Ramsar site. This lake is lying in an ecologically fragile and unbalanced zone which makes this lake system naturally impuissant. As the lake carries religious significance, most of the people who pay a visit are Hindus. People often visit this far to take a holy bath during the Janai Purnima festival, which usually occurs in the month of August.