FESTIVALS YOU SHOULDN’T MISS IN NEPAL

Nepal is an incredibly diverse country with breathtaking cultures and traditions, centuries-old Hindu and Buddhists cultural sites alongside distinct colorful festivals. Home to 4 castes and 36 subcastes Nepal celebrates an array of festivals some with cultural significance while others are linked with ancient mythologies and epic literature. Here is the list of the ten most important festivals in Nepal.

Bisket Jatra a weeklong Newari festival celebrated in different cities of Bhaktapur marks the solar new year ( the only festival which does not follow lunar calendar). It is mainly celebrated in Bhaktapur as Biska Jatra, in Thimi as Sindur Jatra and in Bode as Jibro Chedhne Jatra( tongue piercing festival) for a week. The festival starts with Tantric ritual in the Bhairab temple in Taumadhi Tole in Bhaktapur and ends after the erected pole crashes down following the tug of war between the eastern and the western sides of the city. The festivities conclude with spiritual rites, Newari music, dances, and merrymakings.

Rice Plantation Day, also known as Ropain festival is celebrated on the month of Ashad (June/July) by farmers from all regions in the occasion of planting new seedlings. 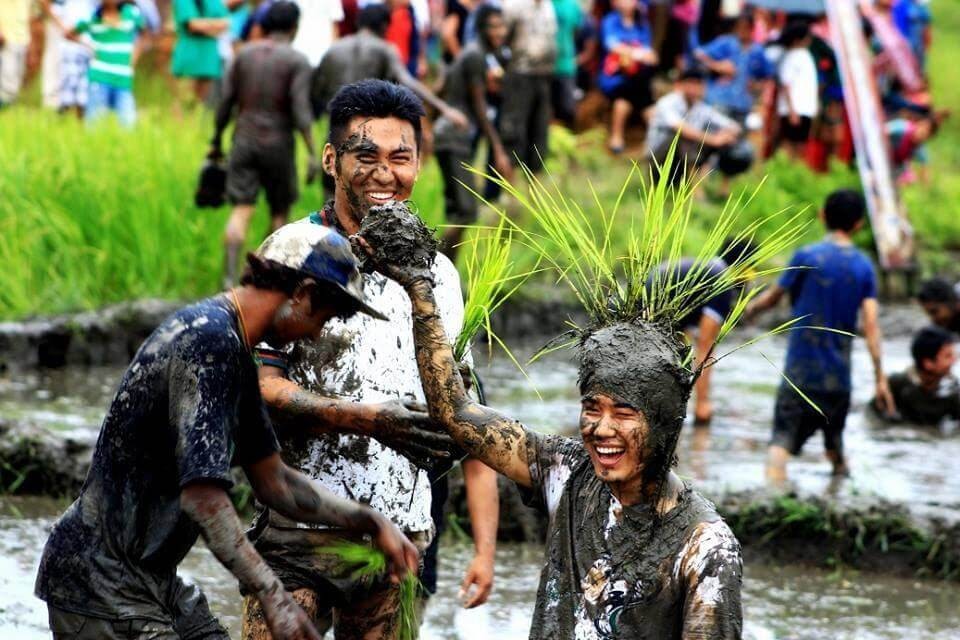 Every year during this season particularly on Ropain Day or National Paddy day, the farmers and interested domestic, as well as international tourists, enthusiastically participate in several paddy plantation events within Kathmandu valley and on the city outskirts. You will often come across tourists who won’t hesitate to dive into the muddy water and enjoy the day.  Don’t be surprised if you see people throwing mud at each other. On this particular day, being dirty is a thing and mud splashing and wrestling are common sights while farmers plant their crops.

Teej or Haritalika Teej is a festival for women, celebrated for three days. During this festival, particularly married women visit their maternal home, feast on Dar ( rice pudding) and fast without drinking water let alone food the next day for the long life of their husband. While unmarried girls keep fast with hopes to get a good husband in life. 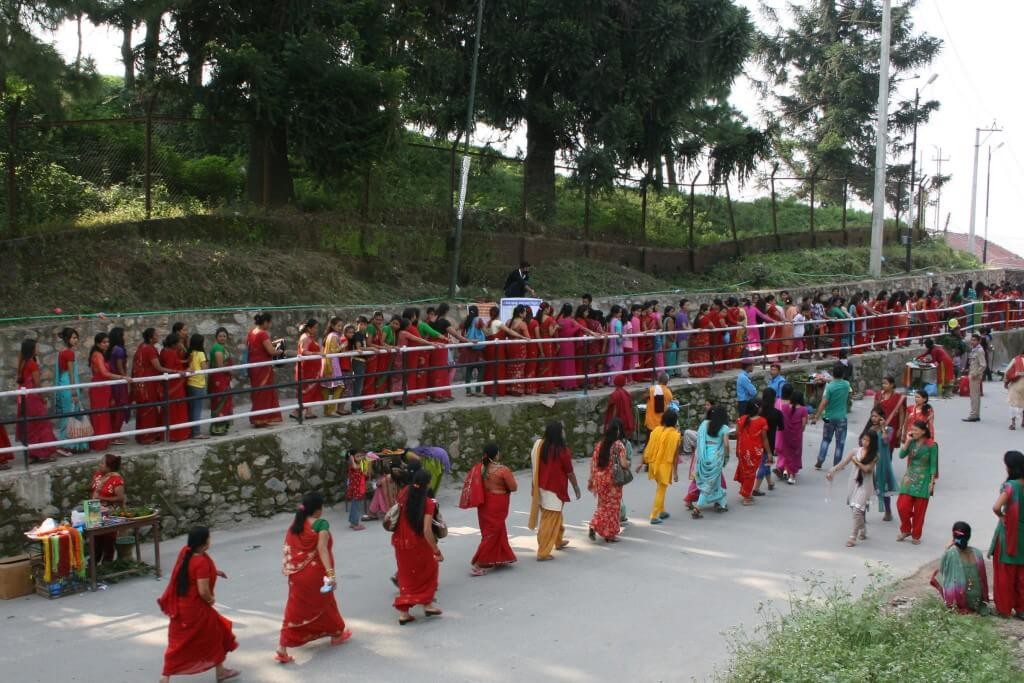 Adorned in red saree, bangles and ornaments women of all ages,young and old, dance for hours in the heat, rain, without a drop of water or food for an entire day.  Women visit Pashupatinath temple on this particular day to worship Lord Shiva. The festival ends the third day after women satisfy seven saints offering them food, money and various offerings. Before offering saints women take bath in Red mud and brush their teeth with Datiwan (branches of a bush tree) with hopes that this purifies their body and soul.

Dashain or Bada Dashain, the longest festival in Nepal celebrated for almost two weeks worshipping and making offerings to goddess Durga. The festival begins with Ghatasthapana where elders plant Jamara ( green rice, barley, and wheat saplings) inside a dark room and leave it there for 9 days. 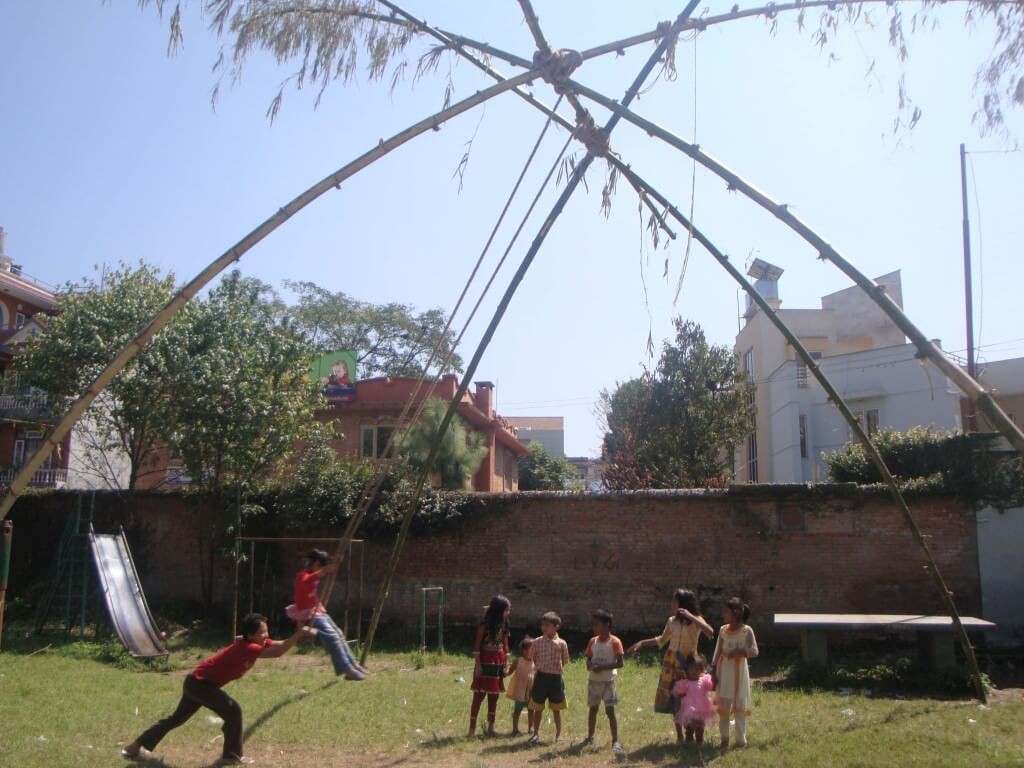 After Ghatasthapana, Dashain begins for real from the seventh day of the festival known as Phoolpati followed by Mahaastami, Navami, and Vijaya Dashami. From Phoolpati to Navami and even Dashami people sacrifice animals to goddess Durga. On the tenth day or Dashami, men and women in their best clothes visit their elders to seek tika ( red vermilion mixed with yogurt and rice) accompanied by blessings. This festival ends on the fifteenth day at Kojagrat Purnima.

The five day festival of light and colors, Tihar is one of the merriest Hindu festivals in Nepal. Tihar begins with Kaag Tihar ( crow Tihar) where the crow is worshipped and offered with foods as an informant of Yama. The animal worship continues on the second day where a dog is worshipped as agents of Yama known as Kukur Tihar. The third day is Gai Tihar and Laxmi Puja. 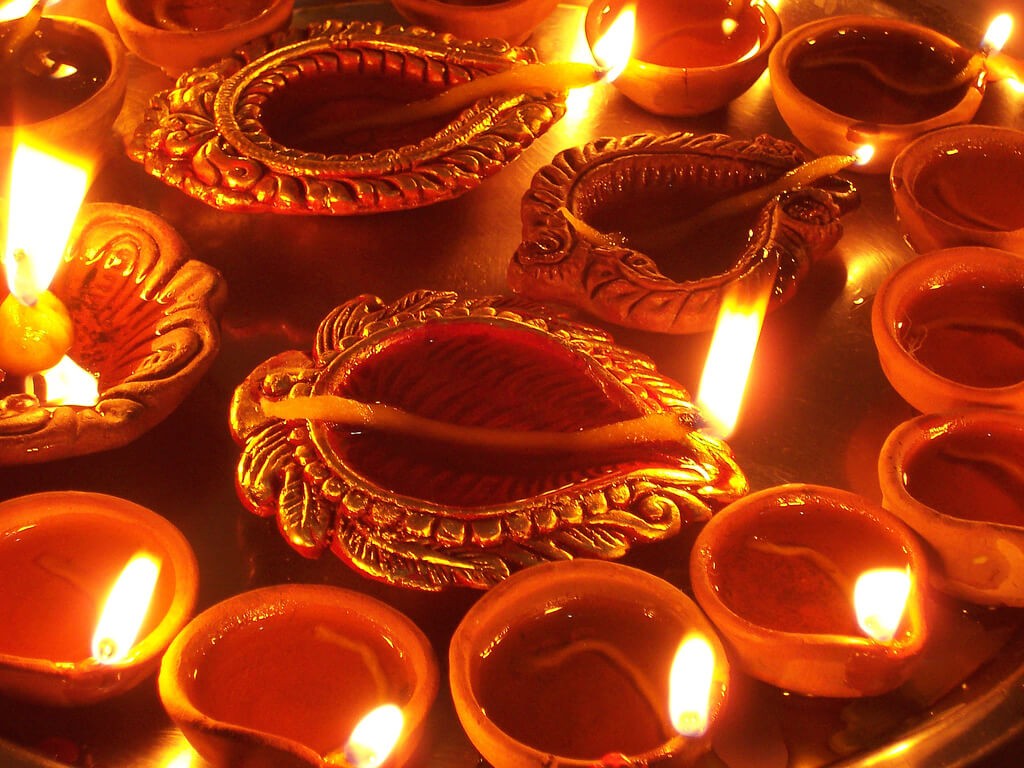 On this day, a cow is worshipped offered with food in the morning and at the evening Goddess Laxmi ( goddess of wealth) is elaborately offered pujas and prayers alongside beautiful lights. It is often believed Goddess Laxmi only enters the well-lit houses. Thus, from Laxmi puja, each and every house are adorned with brightly colored lights and oil lamps. The fourth day is for oxen when the Newari community also performs Mha Puja dedicated to oneself. The fifth day is Brothers’ Day when sisters put tika on their brothers’ foreheads and give blessings and exchange gifts.

This festival is widely known for lighting up of homes with candles, oil-wick lamps and electric lights. It is also traditional to go from house to house singing Tihar songs and blessings, in exchange residents of the house give money and food.

Indra Jatra is the most exciting religious street festival, celebrated by Newari community of Kathmandu valley. The exciting festival of masked dances, religious enactments, lights colors and living goddess Kumari. The eight-day long festival which falls during September embarks the beginning of a month-long festival season of autumn.

The festival begins with the erection of wooden pole made of pine at Basantapur Square in front of the old Hanuman Dhoka Palace for which Living goddess Kumari is taken out for procession on street. On every night of Indra Jatra, the shrines and ancient palace buildings around Kathmandu Durbar Square are decorated with oil wicks. The festival welcomes autumn season with drums, dances, and several religious enactments. It ends after the (lingam) pole bearing Indra's flag amidst religious ceremonies is lowered.

Mahashivaratri which means "The Great Night of Lord Shiva", is a Hindu festival celebrated annually in honor of Lord Shiva. It is observed by remembering Shiva and chanting prayers, fasting, doing Yoga, and meditation. ‘Shivaratri’ means the ‘night of Lord Shiva’. Hindus bathe early in the morning and fast on this day and visit Shiva temples.

This festival is grandly celebrated at the Pashupatinath temple of Kathmandu, where thousands of Sadhus (Hindu holy men) chant “Om Namah Shivaya” and “Mahamritunjaya” all night praying for light over darkness. Tourists enjoy the festival with curiosity, as colorful and naked sadhus are seen meditating, posing for photographs and interacting with disciples. On this particular day, smoking marijuana and hashish are legal as it is considered dear to Lord Shiva. People also drink Bhang, a drink made by mixing ground nuts, spices, herbs and extracts of marijuana into milk and make bonfires at night.

Holi, also known as "Festival of Colors”, is a spring festival celebrated all across the Indian subcontinent as well as in countries with large Indian people. Holi is celebrated with colors, water guns, and water-filled balloons used to play and color each other.

Buddha Jayanti is a special day for both Hindus and Buddhists of Nepal. On this day, people celebrate the life of Lord Buddha; his Birth, Enlightenment and Mahaparinirvana (Death). 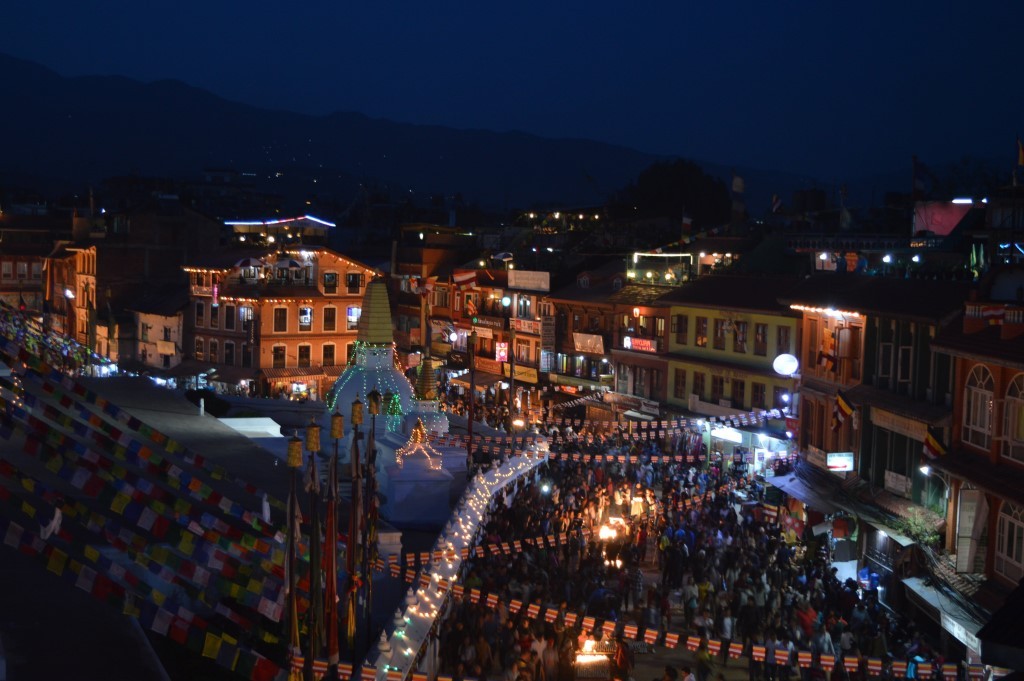 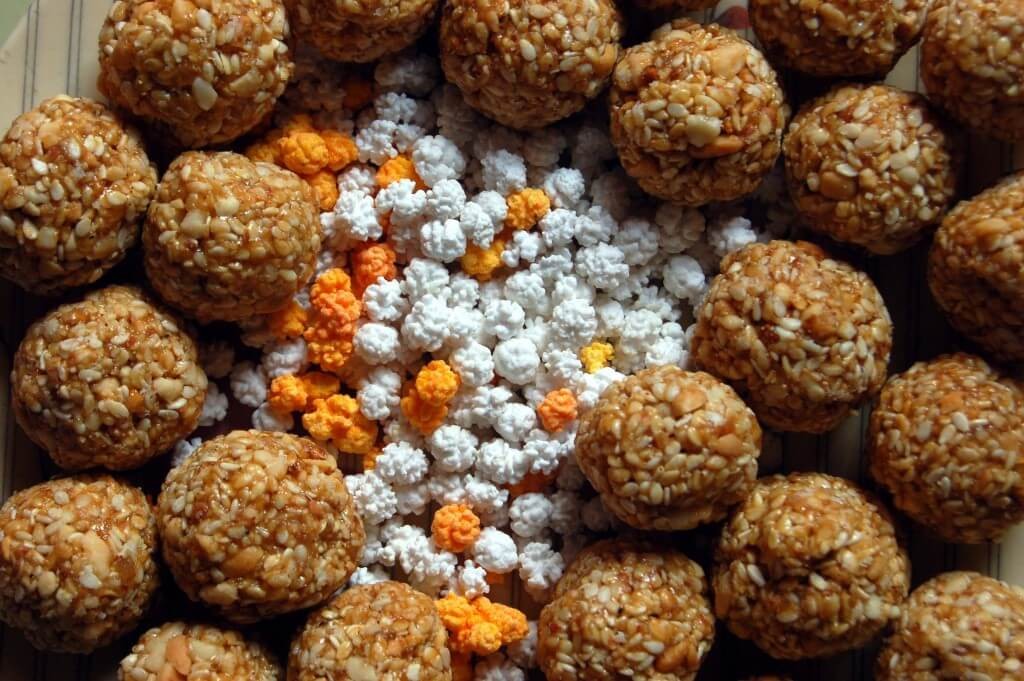 Which festival would you like to celebrate with swotah team? Leave us comments.