Pasang Dawa Sherpa, shortly known as Padawa. A man who knows the Himalayas like his 5 fingers.

Since Everest was conquered on May 29th, 1953 by Hillary and Tenzing thousands of people are attempting to stand on top of the world. Reasons to do so differs from person to person.

Firstly, It Is Fame.

It is fame that drives to spend 60 days on the Everest expedition and challenge yourself. 7,7 billions of population and only how many have been there? Everest is a desirable peak to all mountaineers and mountain lovers. It just stands there, it just attracts and people go.

Secondly, It Is Not For Everyone.

Technically, maybe, if you have previous experience on altitude 7,000-8,000 means you might do it. Of course, no words needed to remind you that excellent physical shape is a must but still, everyone can do it if you have a strong team. The only aspect is money. Not everyone has them. The cheapest option is starting from 50,000USD and can go up to 200,000USD with no guarantee. 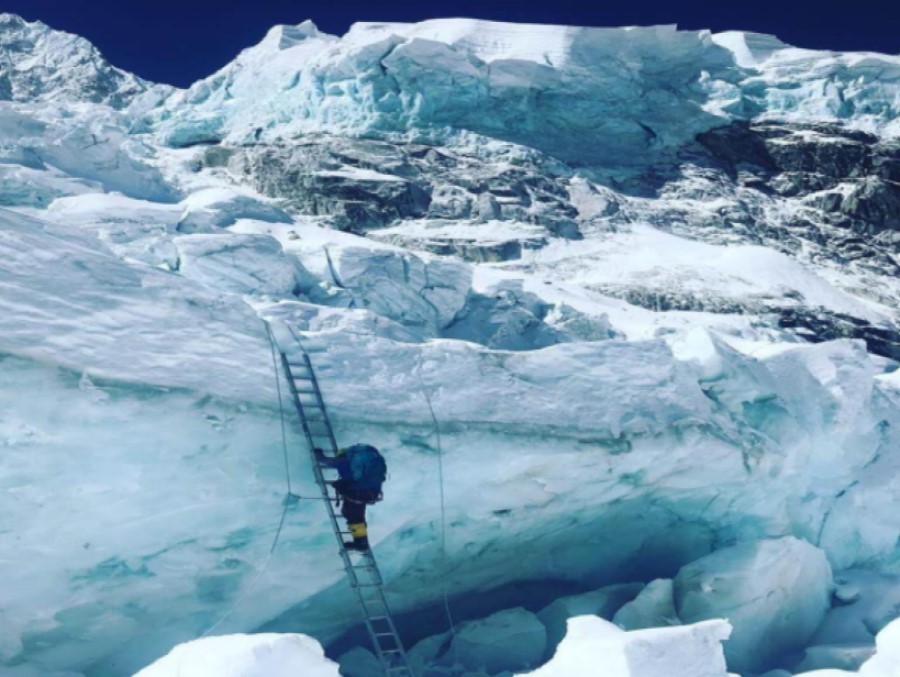 The weather decides everything. You can be strong, feeling great, you can have the best team and the best equipment. All this makes your chances so much higher to succeed but if Mother Nature doesn’t show her mercy to go up – nothing can be done. You wait there and hope for a weather window to start your summit.

Thirdly, A World Record And Be Unique.

In the last couple of years, people have been going up there not because of sports interests anymore. Everyone wants to prove something or has a mission to complete: first woman on Everest, father’s dream, first child on Everest, shortest climb, in memory of, fastest climb, first time in the mountains ever, first single Israeli, oldest Indian couple on top, dying from cancer on Everest, expedition in support of global warming, to feed dying children in Zambia, to stop the war on East and so on. Millions of reasons.

But there is only one clear reason for how you reach the summit: Sherpas.

Sherpas are not porters, yeah? Read our previous article here to have a true understanding of these amazing people.

Pasang Dawa Sherpa climbed Everest for 23 times and more climbs are expected to happen. Without any aim or knowing it, he breaks the world’s record, but it is not recorded anywhere. It is not for fun. It is not for fame. It is his responsibility to make all ambitions, missions, and expeditions for people from all over the world to happen. Preferably without fatalities.

Professionals like him are in demand in the world, they are wanted in any respected trekking company, they are honored and highly appreciated. Not in the case of Nepal unfortunately.

Started his way in the Himalayas since he was 15 as a porter on Everest Base Camp Trek. People who are born on an altitude higher than 4,000m are already strong by nature and can do things that others can’t. Like running, carrying heavy loads, building houses, playing football, and similar activities which even on low altitude we can’t do sometimes. 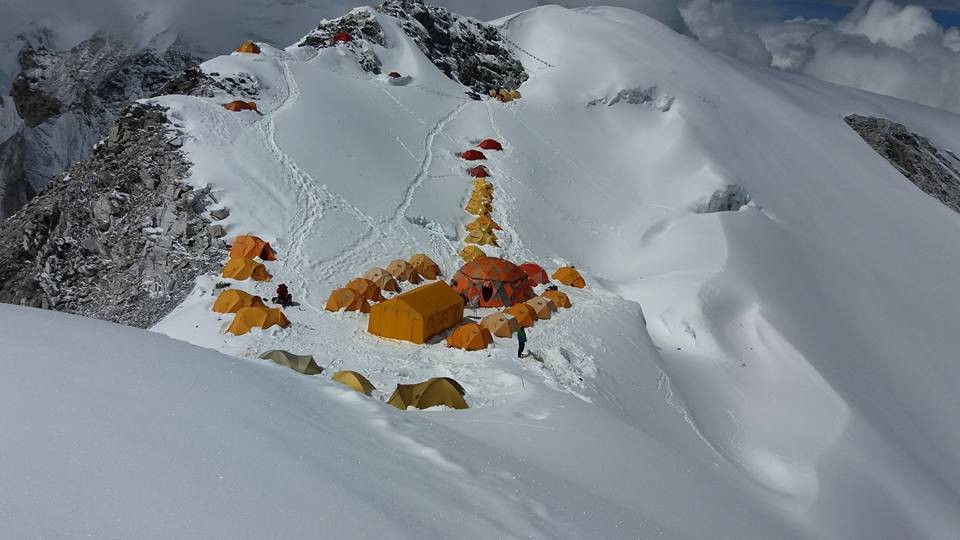 Working as a porter is not something locals dream about but it is certainly one of the best ways in the mountains to make a living. When you go trekking in Nepal you think, “oh, poor people, it’s heavy, why are they doing this? Leave it, not healthy for the back. No, I don’t need a porter, they are suffering”. Or maybe “what? A porter for 20 USD a day? Then here you go, 30KG for you…”There are always different people. Nowadays it becomes even more difficult to work as a porter because yaks are highly competitive, don’t need a salary and can carry more.

So, after being a porter he eventually started to be a part of more difficult expeditions as a cook in expeditions like Ama Dablam, Island Peak, Cho Oyu, Lobuche, and others. Eventually got training and became a group leader.

By showing his passion, dedication and high professionalism, it led him to become a team member and summit Everest in 1998 for the first time when he was only 21.

What’s the role of sherpas there? 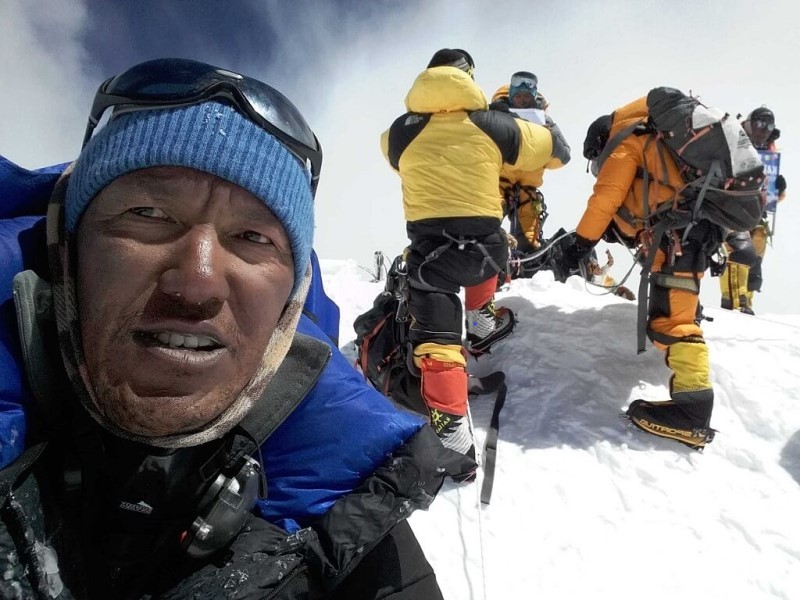 They are the ones who go first, who find the way, who fix the ropes and ladders, who carry crazy heavy oxygen balloons for themselves and clients, who step in first in snow to make a trail, first to step on top of the world before their clients come and take all the space for their own flags and photos, the ones who take care of weak clients, old clients, wealthy clients, young clients, female clients, first time climbers clients, dying clients, healthy clients, strong clients, Israeli or Indian or any nationality clients. Literally EVERY client. No exclusions. No expedition can happen without Sherpas.

First years after climbing Everest, it wasn’t even something significant for Padawa. No obvious evidence left like photos or certificates. Just mentions in company’s documentation or pics from his clients. No sports interest, no aim to be world-famous. It was only a job that fed him and his family.

Dave Mellor, a climber from the Bahamas, knows him since 1997: “Climbing with Padawa since 1997…. Sitting alone in Ama Dablam Camp 1 and this young kid arrived telling me that Kami had sent him to "look after the old man and make sure he didn't fall off the mountain"... He was great then and just got better over the past 22 years”.

The mountains they shared are Ama Dablam, Island Peak, Lobuche. Cholatse, Cho Oyu, Everest, Lhotse, Manaslu, Shishapangma, etc. He describes him as “a very experienced, super strong, natural mountaineer who has been a guide on many 8,000 m mountains including K2 and solely responsible for saving numerous lives in extremely difficult and dangerous situations which he never really received any credit for . . . But the people who know him including me can vouch for everyone.”

Pasang Dawa was one of the firsts to summit Everest this year in 2019 as part of the hazardous rope fixing team (we’ve all seen those traffic jams on Everest on May 23d) and then guided a client to the summit just a few days later. Which means he summited twice. Despite all of these achievements he has never received the accolades and honors so richly deserved. Nobody heard about him abroad but this man is highly respected and known in the mountaineering world.

When I was going to meet Padawa in our office a month ago, I was extremely excited and expected to see a confident and a strong man with temper and ambitions. Instead, I met a simple and humble man, breathing hard of the heat in Kathmandu. It is in some way hilarious to admit the fact that sherpas feel comfortable up there, in coldness on high altitude with thin air, and suffering down here from the sun and warmth. Shy and quiet, never talked about his achievements himself. I was the one to ask more and more.

No expensive shoes or brand clothes, simple phone and no idea how to use email. Favorite food is dal bhat and momos, favorite place on Earth is Dingboche where he was born (4,400m). The favorite mountain is Lobuche Peak, never been abroad, no sponsors, no high-end house. But! A huge heart, tough character, unbelievable experience and a power to lead people on the highest peak of our planet.

There is no one who can beat his achievements. A rock, a machine, a hero, a father, a Nepali, a pride of the Himalayas.

An ordinary man with an extraordinary life!

Want to make your journey wonderful and safe with our amazing team? You know where to get us.