When it comes to Nepali cuisine, Daal-Bhaat-Tarkari is what everyone thinks of but it is much more diverse than that. Every ethnic group and community has its own food culture and way of cooking. Even the Newar communities living in Kathmandu and Bhaktapur have some variance in their cuisines, and similarly in Tharu communities living in the eastern region and far-western region. This is the reason behind the presence of enormous varieties of cuisine and to get that particular ethnic taste, you will have to say goodbye to your fork and spoon, and use your hand instead. 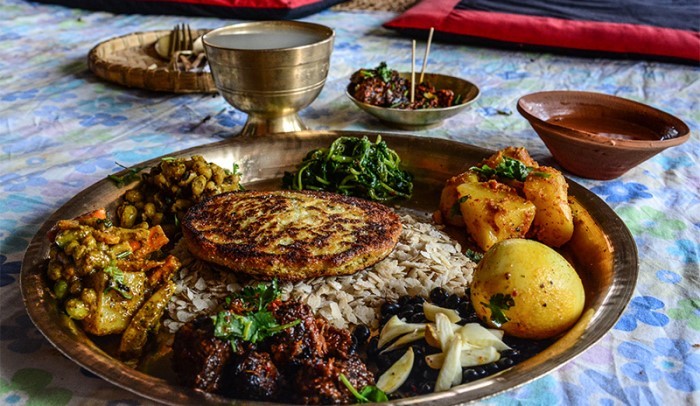 Newari cuisine is one of the most delicious foods with intense flavor consisting of over 200 dishes. It widely uses buffalo meat. There are dishes for every edible part of buffalo meat (cooked and uncooked) which includes intestine, stomach, and brain. It is the other reason why they are famous. 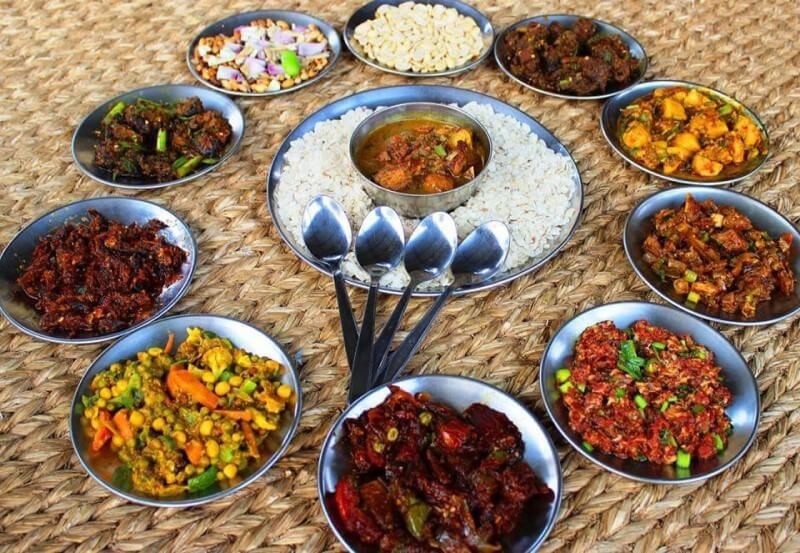 For vegetarians, meat and dried fish can be replaced by fried tofu or cottage cheese. Dessert consists of Dhau (yogurt), Sisabusa (fruits) and Mari (sweets). There are pickles made with Aamli fruit and other items. Thwon (rice beer) and Ayla (local alcohol) are the common home-made alcoholic liquors.

Thakali food is basically Dal-Bhat-Tarkari − Lentils, Rice and Vegetables, with Meat (Chicken or Mutton), Spicy Fried Potatoes and Spinach for non-vegetarians. As for vegetarians, Meat is replaced with Carrots, Cauliflower, Peas, and Green Beans which are cooked using the same spices as in the preparation of Meat. Most modern Thakali restaurants, however, also offer Momos (meat dumplings) and Thukpa (noodle soup).

Sometimes Buckwheat Breads (like chapatis or pancakes) may be served with the basic Curry and Kachhyamba (buckwheat finger chips) as an appetizer. Desserts include Sweet Curd or Phopke (fermented rice). Some places fry tiny pieces of Churpi (hard yak cheese, the stringy variety), and serve the Phopke over it with a little ghee to make it extra special. Fresh tomato relish and white radish pickle are placed to the side.

Fried Tarul (Yam) with Spices and Batuk, commonly known as Bara are the popular ethnic delicacies of Magar communities. Batuk is made from black lentils and is best served alongside pork and Kodo-Ko-Raksi (local alcohol made from millet). Batuk rotis are shaped like Western doughnuts, but the taste is easily distinguishable. The crunchiness on the outside complements the soft texture inside. 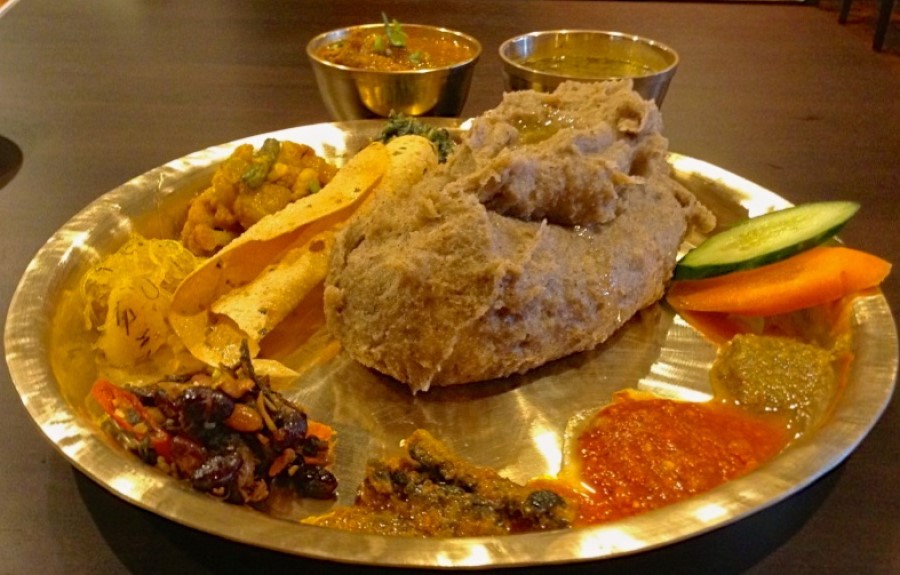 It is a porridge-like alternation of Maize, Buckwheat, Barley, or Millet. The vegetable can be spinach and fresh greens, fermented and dried greens, white radish, potatoes, green beans, cauliflower, cabbage, pumpkin, etc. Yogurt and curried chicken or fish are served as side dishes with few varieties of a pickle. However, in some places, the meat of wild boar (pork) may also be served.

It is a very common and must-have food item. Sukuti can be served both as an appetizer/snack laden with spices and tomato sauce, it can also be cooked alongside vegetables like potato, zucchini, or pumpkin to make gravy that is highly preferred with dhindo. The tanginess from the tomatoes and the mixed-in spices gives a real kick to this dish.

Another side dish in Gurung cuisine is sauteed fiddlehead fern with fermented or dried anchovies with a lot of tomatoes and garlic. This is a very simple, yet delightful, side dish that complements the Gurung thali (plate) very well. 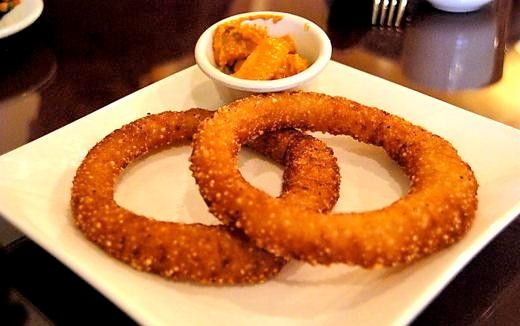 It is a Nepali homemade ring-shaped, rice doughnut that is a very important snack in many ethnic groups. Sugar or Honey is used for the sweetness and pure ghee, made from buffalo milk, is mostly preferred to fry them. It is fried until the batter turns a reddish-brown in color and the outer layer becomes crispy. Selroti is often paired with different types of pickles.

Karkalo Ko Aachar and Karela (bitter gourd) Ko Aachar are two types of pickles eaten by the people. Karkalo is the Nepali name for the taro plant. All three parts of the plant are highly used in Nepali cuisine. In this case, the leafy part is used to make aachar (pickle). It is a very different and unique taste to one’s taste buds.

Skimmed milk is known as Mohi in Nepali. In Gurung cuisine, it is a much-loved and favorite dish of all. A fine paste of chili, garlic, and salt is added to the mohi. For this dish, slightly sour mohi is preferred. It is very tangy, spicy, and full of flavors. In some cases, even mint or coriander paste is added.

Raksi is a Nepali traditional alcoholic beverage that is either made from millet or rice. Kodo means millet in Nepali. It is a very strong drink that is clear in appearance. It goes really well with sukuti.

Kinema: Kinema is fermented soybeans, which are then dried and stored and then used to make curry, soup, and pickles. 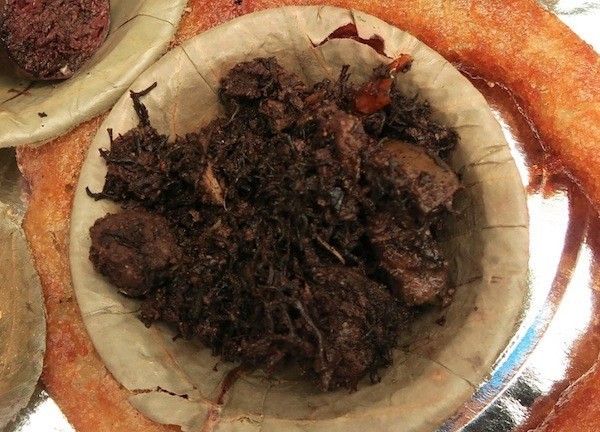 Meat from local domestic pigs (sungur) is one of the much loved and widely consumed foods. The pork meat is simply cooked with yangben (wild edible lichen), blood and spices such as onion, ginger, garlic, cumin seed, and coriander seed.

Wachipa: Wachipa is a special dish made by cooking rice, minced local chicken meat along with burnt downy feather follicles and offal. It has unique bitter taste and aroma that you get in from firewood roasted meat. 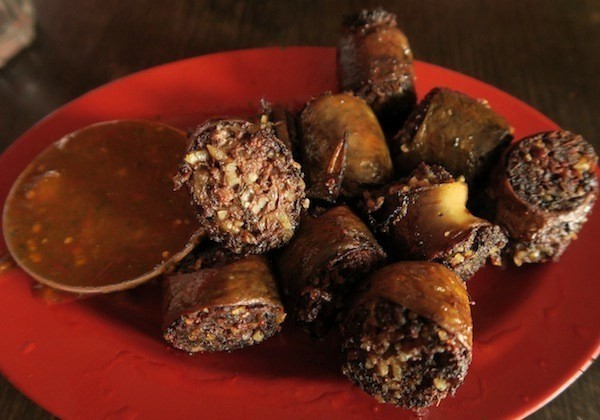 Sargemba is basically a blood sausage prepared from pig blood, yangben (wild edible lichen), rice and spices, and encased in pig intestines. It is one of the rare delicacies prepared in a few restaurants. Almost all parts and organs of the pig are consumed by making various delicacies.

Chhop Achaar (pickle): It is a dry ground form of pickle made from oily seeds such as niger seed (Philinge), pumpkin seed and sesame seed along with salt, spices powder and sour agents such as lime juice.

Rice and Dhido: Steamed rice and Dhido (prepared by cooking millet or buckwheat flour in boiling water) is the main staple dish, which is generally eaten with vegetable curry, meat curry, Daal (Lentil soup) or other soup and Achaar (pickle). 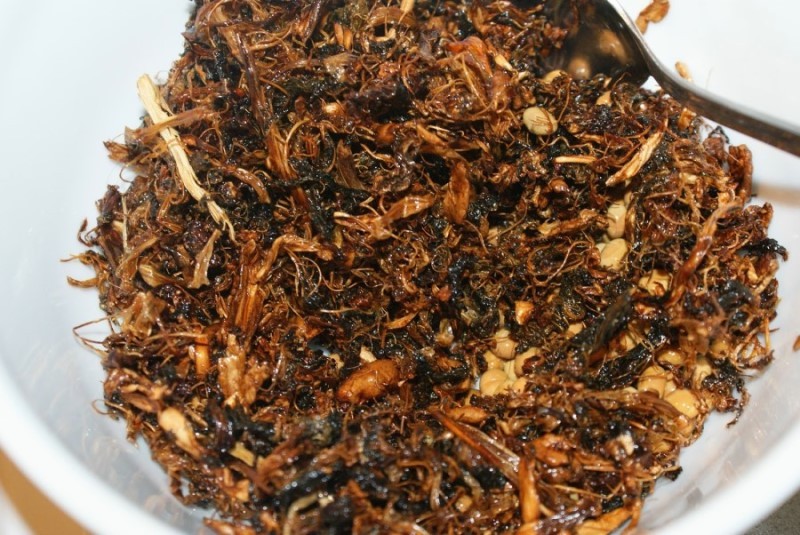 As in many other ethnic communities, gundruk made from fermenting spinach especially and then dried is also a popular and everyday food item. It is generally made into a pickle by adding green herbs, spices, and oils. It is also made into the soup as an alternative to lentil soup. 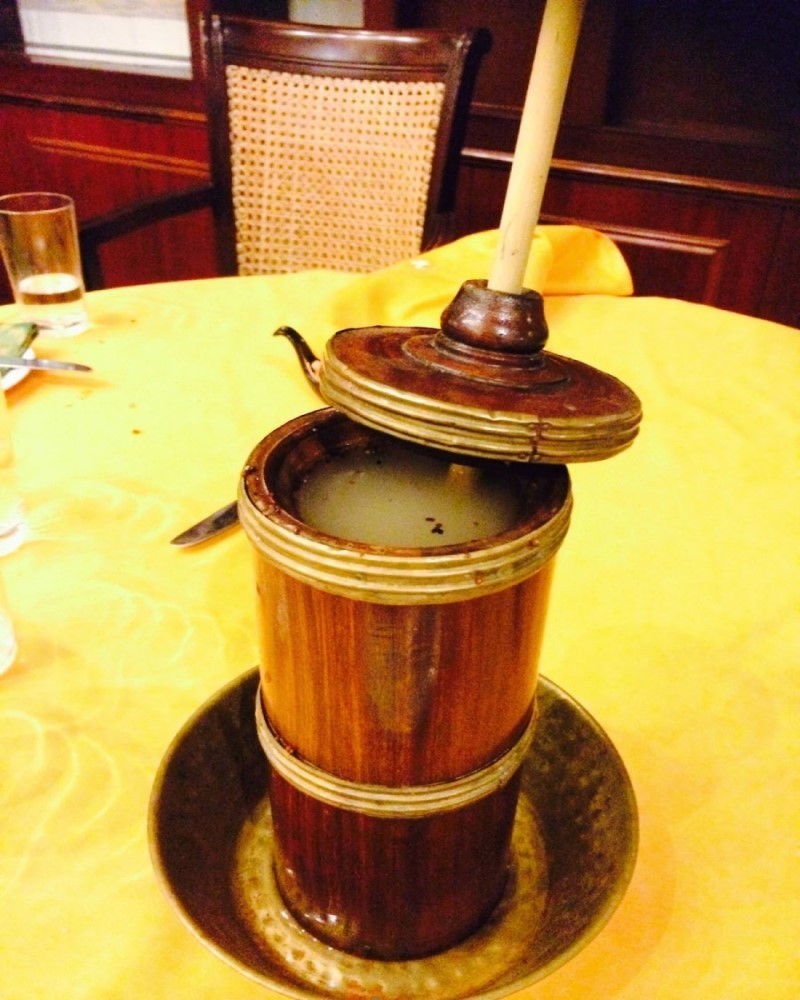 Tongba is an alcoholic beverage prepared by fermenting millet and served with pouring hot water over fermented grains in a special cylindrical vessel. Raksi is a hard distilled version generally made from fermented millet. These beverages are served as a gesture of respect, and also a must-have drink in occasions and festivals. 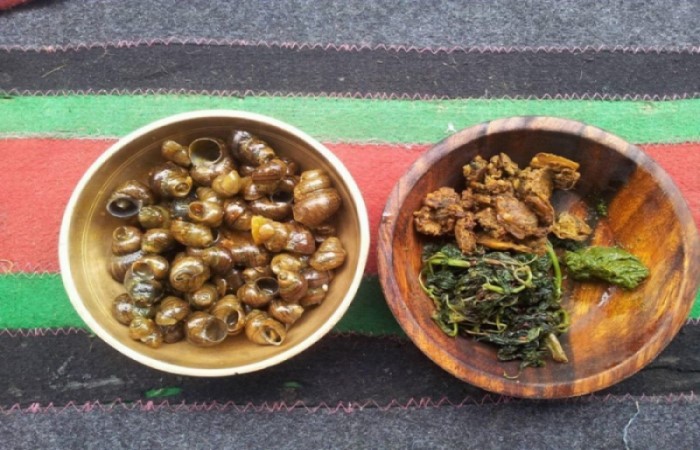 Most of the Tharu dishes are rice-based. Rice and lentil are molded into various shapes and steamed to make Dhikri or Bhagiya and a special kind of sticky rice called Anadi is steamed and served. Furthermore, some other special Tharu food items on the menu include Pakuwa (barbecued meat), Gughi (boiled and spiced snails) and an assortment of Tina (vegetables). Another short compendium of Tharu recipes includes Roasted Crab, Wheat Flatbread, and Fried Taro Leaf Cakes.

India-influenced dishes include Malpuwa (sweet wheat fritter), Dahi Bara (lentil dumpling topped with savory gravy of yogurt, tamarind, and spices) and Mithais (sweets). Sidhara, a unique food item of Terai is a mixture of taro root, dried fish and turmeric that is formed into cakes and dried. The cakes are broken up and cooked with radish, chili, garlic, and other spices to accompany boiled rice.

Lohorung is indigenous to eastern Nepal. They have a variety of food in their cuisine made from local ingredients. One of the main dishes is Wachipa also called Wamik. It is a traditional Kirat dish cooked with minced chicken, rice and powder of burnt feather of chicken. This powder gives this dish a bitter unique taste. Vegetarians replace chicken with flowers or leaves of a plant known as Damlapa.

It is also believed that eating this dish cures body aches. Other foods include Masikdaam, Kinima (side dish eaten as a soup with rice or chapati), Sibring, Sel roti (round shape roti made from rice flour, sugar, and butter), Bawari (a roti of rice flour batter cooked in hot oil), Dhule Achar (a type of pickle grinding sesame seed, ginger, salt, oil, chili together turning into fine powder), Saruwa, Chamre (rice cooked in ghee, water, and salt), Yangpen and Dibu. Drinks include local drinks made of rice or millet called Tongba.

Enjoyed reading this blog? You may also like: Festivals you may not want to miss in Nepal